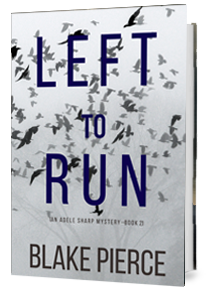 “When you think that life cannot get better, Blake Pierce comes up with another masterpiece of thriller and mystery! This book is full of twists and the end brings a surprising revelation. I strongly recommend this book to the permanent library of any reader that enjoys a very well written thriller.”

LEFT TO RUN is book #2 in a new FBI thriller series by USA Today bestselling author Blake Pierce, whose #1 bestseller Once Gone (Book #1) (a free download) has received over 1,000 five star reviews.

A serial killer is ravaging the American expat community in Paris, his kills reminiscent of Jack the Ripper. For FBI special agent Adele Sharp, it’s a mad race against time to enter his mind and save the next victim—until she uncovers a secret darker than anyone could have imagined.

Haunted by her own mother’s murder, Adele throws herself into the case, delving into the grisly underbelly of a city she once called home.

Can Adele stop the killer before it’s too late?

An action-packed mystery series of international intrigue and riveting suspense, LEFT TO RUN will have you turning pages late into the night.

Book #3 in the ADELE SHARP MYSTERY is now available for pre-order.