ONCE CRAVED (A Riley Paige Mystery–Book #3) 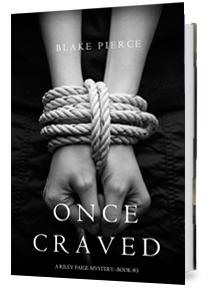 ONCE CRAVED is book #3 in the bestselling Riley Paige mystery series, which begins with ONCE GONE (Book #1)–a free download with over 100 five star reviews!

When prostitutes turn up dead in Phoenix, not much attention is paid. But when a pattern of disturbing murders is discovered, the local police soon realize a serial killer is on a rampage and they are in way over their heads. Given the unique nature of the crimes, the FBI, called in, knows they will need their most brilliant mind to crack the case: Special Agent Riley Paige.

Riley, recovering from her last case and trying to pick up the pieces of her life, is at first reluctant. But when she learns of the grievous nature of the crimes and realizes the killer will soon strike again, she is compelled. She begins her hunt for the elusive killer and her obsessive nature takes her too far—perhaps too far, this time, to pull herself back from the brink.

Riley’s search leads her into the unsettling world of prostitutes, of broken homes, and shattered dreams. She learns that, even amongst these women, there are glimpses of hope, hope being robbed by a violent psychopath. When a teenage girl is abducted, Riley, in a frantic race against time, struggles to probe the depths of the killer’s mind. But what she discovers leads her to a twist that is too shocking for even her to imagine.

A dark psychological thriller with heart-pounding suspense, ONCE CRAVED is book #3 in a riveting new series—with a beloved new character—that will leave you turning pages late into the night.

Book #4 in the Riley Paige series will be available soon.