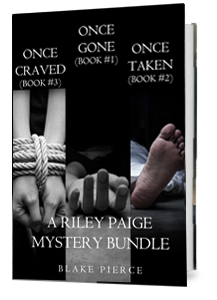 A bundle of books #1 (ONCE GONE), #2 (ONCE TAKEN) and #3 (ONCE CRAVED) in Blake Pierce’s Riley Paige Mystery series—a #1 bestseller with over 350 five star reviews! This bundle offers the first three books in one convenient file, and offers a great introduction to the series, with over 200,000 words of reading.

In ONCE GONE, women are turning up dead in the rural outskirts of Virginia, killed in grotesque ways, and when the FBI is called in, they are stumped. A serial killer is out there, his frequency increasing, and they know there is only one agent good enough to crack this case: Special Agent Riley Paige. Riley is on paid leave herself, recovering from her encounter with her last serial killer, and, fragile as she is, the FBI is reluctant to tap her brilliant mind. Yet Riley, needing to battle her own demons, comes on board, and her hunt leads her through the disturbing subculture of doll collectors, into the homes of broken families, and into the darkest canals of the killer’s mind. As Riley peels back the layers, she realizes she is up against a killer more twisted than she could have imagined.

In ONCE TAKEN, women are being murdered in upstate New York, their bodies found mysteriously hanging in chains. With the FBI called in, given the bizarre nature of the murders—and the lack of any clues—there is only one agent they can turn to: Special Agent Riley Paige. Riley, reeling from her last case, is reluctant to take on a new one, since she is still convinced a former serial killer is out there, stalking her. She knows, though, that her ability to enter a serial killer’s mind and her obsessive nature is what will be needed to crack this case, and she just can’t refuse—even if it will push her over the edge.

In ONCE CRAVED, when prostitutes turn up dead in Phoenix, not much attention is paid. But when a pattern of disturbing murders is discovered, the local police soon realize a serial killer is on a rampage and they are in way over their heads. Given the unique nature of the crimes, the FBI, called in, knows they will need their most brilliant mind to crack the case: Special Agent Riley Paige. Riley, recovering from her last case and trying to pick up the pieces of her life, is at first reluctant. But when she learns of the grievous nature of the crimes and realizes the killer will soon strike again, she is compelled. She begins her hunt for the elusive killer and her obsessive nature takes her too far—perhaps too far, this time, to pull herself back from the brink.